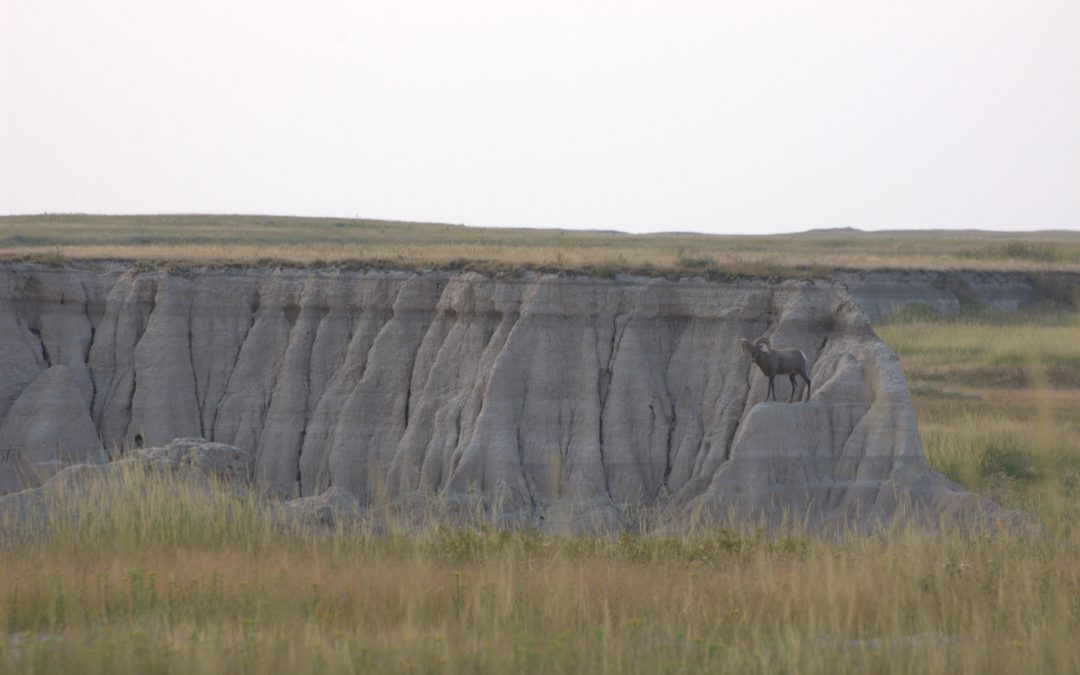 When we’ve talked to someone about the Badlands National Park of South Dakota, a common response is – “Oh yeah, we drove through that on our way to Yellowstone. Weird place!” In our effort to champion the more “underdog” parks, we wanted to make sure we didn’t treat this one like the world’s biggest ball of yarn, and just keep passing it by.

The South Dakota landscape is fairly level with some gentle roll to its pastured hills, but the Badlands are really the first thing you come to (coming from the east) with some structure to them. You first see dry tan outcroppings in the distance here and there with rolling grassland throughout. You start seeing a few more teasers, but you know the Badlands are out there, and you get the sense that you’re driving up to the edge of a basin somewhere. Once you reach the Badlands and the views open up, it’s easy to see why this landscape is odd and harsh, but it takes a little more patience and thought to see it as something richer and warmer. 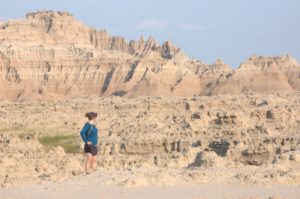 A look through the Badlands is a look through time. Much of the western US was once covered in a vast inland sea at a warmer time in the earth’s history, and if you look into the geology of the region, this comes up again and again in it’s origin story according to Western science. Soft sediments of mud on the sea floor mixed with the calcium rich skeletons of sea creatures (corals, etc.), and even wet forests after that, ash from volcanic eruptions, and sediment from rivers are all arranged in a beautiful vertical history book in the Badlands. What’s even wilder, is that many ancient creatures that lived here and perished were amazingly well preserved in soft ocean sediment or wet mud, and thousands of fossils have been found here. Rhinoceroses, beavers, antelopes, huge turtles, and other extinct creatures are constantly exposed in this landscape where an inch of the soft soil can erode every year. Even the observant hiker going along an erodible ridge can even spot some themselves (we were asked to let the visitor’s center know if we saw any!). 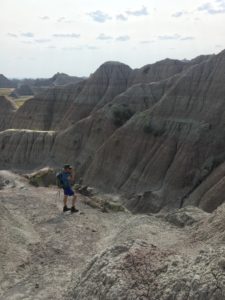 More recently this land was a seasonal hunting ground for the Lakota, Mandan, Hidatsa, Arikara, and other First Nations’ people. They were also the first to refer to the area by names similar to “bad lands,” referencing its harshness: lack of water, extreme temperatures, high winds, and tough soil. Our country’s history is laced with efforts of a young nation of newly arrived Europeans pushing out the country’s first peoples, and this place was no different. Through broken treaties and violence, the plains peoples were pushed off this land and killed, and the land instead was granted to eager homesteaders from the east by the U.S. Government. The land that was promised to enterprising settlers soon proved extremely difficult to farm or making a living in, and many of these newcomers did not survive either. Rightfully so, a visit to most of our national parks can bring up a strange mixture of emotions. Awe and pride for these fantastic places we’ve protected as a nation, with the added realization that we are celebrating stolen lands with a dark history to boot. The best thing we can do is genuinely acknowledge these historical truths, appreciate the land’s past and current caretakers, change what we can and not dwell on what we can’t, and continue to learn about these places and the cultures that are as much a part of them as the prickly pear cactus or the American bison embedded in the parks’ acreage.

After stopping in at the Ben Reifel Visitor’s Center and learning about the rich natural history and uniquely adapted species (including humans) that call this landscape home, it starts to seem more welcoming. The land isn’t necessarily harsh to them, it’s just the place they know and persist in. Bison, rattlesnakes, cacti, coyotes, and toads all find their place in a landscape with unlikely combinations. After we learned about and got excited about the park, it made me actually look forward to experiencing the harshness. Like – bring on the dry hot sun, the steep hikes, and lack of water, I want to feel this place under my feet and on my skin! 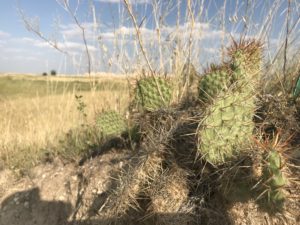 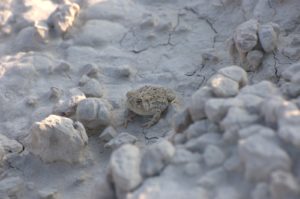 We decided to take the “Medicine Root Loop,” which was a little over 4 miles. We started with a steep climb from the road and a seasonal creek to a plateau, with interesting vegetation and soft rock formations on top. After grinding our treads into the chalky soil and reaching the top of the hill, we were quickly rewarded with a vast and layered view of the Badlands. A horizontally dominated view with stacked layers of time, and lines of different hues piled on one another in formations with soft edges from erosion. Seeing the same hill from a different angle or at a different time of day changes the colors again, and you can’t help but grin with intrigue. After passing through a flat saddle we entered our loop, which was almost like walking into another scene all together. There was extensive grassland stretching to the horizon with an occasional formation, ledge, flat-topped hill (or “butte”), or an occasional cottonwood tree or two. The ground, when dry, almost turns to rock, but there was an extensive grassy scene with large smiling sunflower heads as happy as clams! These plants are at home in the harsh west. 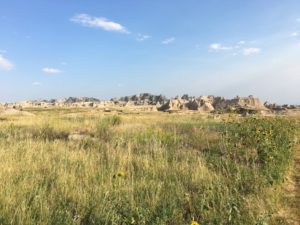 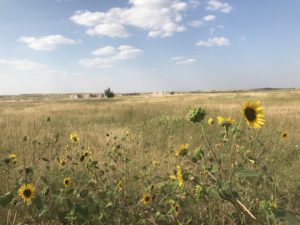 Familiar prairie plants and species found in Michigan mixed with plenty of novelties, so that we stopped often to admire the new landscape. Save for a couple of groups of animated Western kingbirds and dog-fighting nighthawks, the bird song was pretty quiet on this toasty August day when bird nesting and thus singing was mostly done. Dry insect calls replaced bird ambiance as we hiked along. Just when we would say ”Ok let’s pick up the pace and finish at a decent time,” we would pause and helplessly admire something: a pile of cool stones, a flowering plant, a cactus colony, or an erosion pattern. Like the cactus we too were very pokey and put the end of our hike not only in the golden hour of light, but the golden hour for wildlife activity as well. 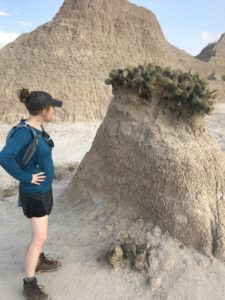 As we approached the end of our loop, something caught my eye and I instinctually stopped and grabbed Emily’s shoulder. There was a silhouette of a large-hooved animal on the edge of a distance ledge. Large curled horns: a bighorn sheep!! We both got a solid look before the animal trotted down off the small butte into the grass; tops of horns still barely visible. Further inspection with the binoculars revealed there were several pairs of horns topping the grass at ~80 yards away. We looked at each other jaws agape, trying to believe our good luck. Luckily, I had brought my telephoto lens with a camera and snapped some distant shots as the herd revealed more of themselves. There were 5, and what seemed to be the ram in charge would take the group up a rise, or to a patch of plants, and the group would gang up on them and munch down. 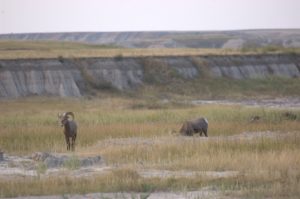 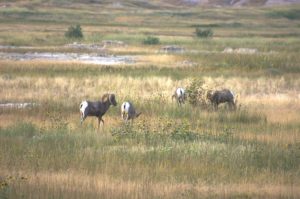 We were so enamored with our front row experience that we lost track of the distance between us and the animals! After a couple nervous shutter clicks, an uncomfortable head shake from the lead ram 30 yards out told us to scoot. We nervously yet reluctantly power-walked down the trail, glancing over our shoulders every few steps. We also realized the herd was essentially on the trail we had just walked, coming in our direction. Almost reaching our downhill to the car, we glanced over and saw more animals silently shuffling through the grassland. Two more rams. We were between two groups of hard-headed bachelors! We snuck out and tucked in behind a shallow hill to watch from a distance. The groups came together uneventfully, just a little glancing of horns between two smaller up-and-coming rams. After giving fore-warning to some would-be overnight campers coming up the trail, we wistfully hiked away until these awesome animals disappeared from view.

Our first “out west” national park and we were thoroughly rewarded with a genuine wildlife encounter – one where your pulse quickens! Cruising out of the park elated, we drank in this warm moonscape, rolled down the windows to let the cool dry air brush our smiling faces. We spotted a coyote silhouette in the fading light around a hilltop and knew that these “badlands” were far richer than the casual visitor might realize. 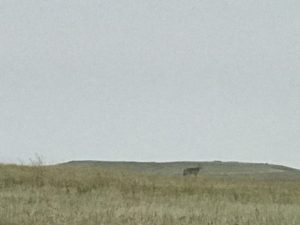 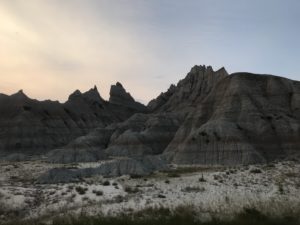